In Bishkek, at the Kyrgyz State Technical University, a ceremony was held for awarding certificates based on the results of an independent ranking of universities in Kyrgyzstan for 2022, which was attended by the rector of Osh State University H.E Mr. Kudaiberdi Kozhobekov.

According to the results of the “Ranking of universities in Kyrgyzstan -2022”, conducted by an independent agency for accreditation and rating (IAAR), Osh State University took first place in the general general ranking, for which the university was awarded a certificate and a special statuette.

Osh State University was also recognized as the best in assessing the internationalization of education and academic mobility.

The event was organized by independent agency for accreditation and rating (IAAR) and the Ministry of Education and Science of the Kyrgyz Republic. 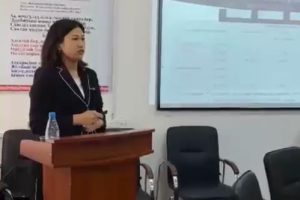 DISCUSSION OF THE THESIS OF OUR COLLEAGUES ESHIEVA ASEL ABDYRAKMANOVNA DEPARTMENT HEAD M.I.K., ASSOCIATE PROFESSOR KURBANBAEV O. I. HE WENT ON A WORKING VISIT TO “ZARNITSA” AND “EIDOS MEDICINE” VIRTUAL MEDICAL TRAINING TRAINING ENTERPRISES IN KAZAN, RUSSIA FROM 16.11.2022 TO 19.11.2022