In 1962 he graduated from high school named after. N. Krupskaya in the village of Otuz-Adyr, Kara-Suu region.

In 1968 he graduated from the Faculty of Dentistry of the Medical Institute in Frunze. He began his career as an intern at the Kara-Suu regional hospital. In 1972 he was appointed chief physician of the TB dispensary.

In 1981 he successfully defended his Ph.D. thesis in Almaty. A year later, on the recommendation of the Ministry of Health, he was sent to Yemen.

In 1985-1987 he was Deputy Director of the Kyrgyz Research Institute of Phthisiology, Ecology and Infections.

In 1992 he defended his doctoral dissertation at the All-Union Research Institute for Pulmonology in Leningrad (St. Petersburg).

At the same time he became deputy director of the Kyrgyzfarmindustriya state concern. In 1993 he was appointed Deputy Minister of Health.

In 1996 he became an expert at the regional office of the World Health Organization in Ankara (Turkey).

In 2002, he was appointed dean of the medical faculty of Osh State University. 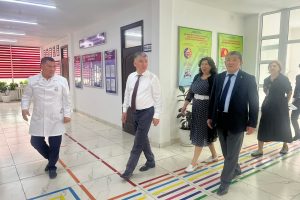