Professor of the Faculty of Russian Philology, Ph.D. K.Z. Zulpukarov and the head of the department of academic mobility, associate professor SM The Amiralievs took part in an international scientific and technical conference dedicated to the 30th anniversary of the Tashkent Institute of Chemical Technology. More than 20 countries, including the United States, Spain, Russia, Belarus, China, Korea, Kazakhstan, Kyrgyzstan and others. Semetei Manasovich delivered a welcoming speech in English at the ceremony, which was attended by leaders and scholars of the countries offline and online.
On behalf of Osh State University, Rector H.E Kudaiberdi Kojobekov, he congratulated his colleagues on the anniversary, spoke about the achievements of the institute, its close ties with Osh State University, wished success to the conference, and wished the university growth and new scientific achievements. He thanked the management for the invitation and warm welcome to participate in the event.
During the two-day ceremony of the Institute, work was carried out in sections. Professor Kapar Zulpukarov made a presentation on “Correlation of constants and variables in the structure of the Kyrgyz-Chinese common morpheme.” As a result of the conference “Actual problems of innovative technologies in the development of chemical, oil and gas and food industries” dedicated to the honorary date, a special collection was published, in which 2 articles of the delegation were published. From 2nd to 4th June 2021, Osh State University will host international program accreditation of the Independent Agency for Accreditation and Rating (IAAR). 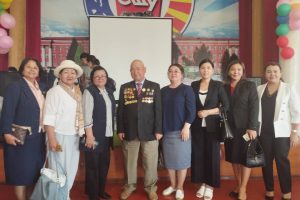