December 20, 2019 In the walls of the ministry of education and science of the kyrgyz Republic, the winners of the contest “innovative ideas among the universities of kyrgyzstan” was held
The contest was launched in November 2018 by ednet quality assurance agency with the support of the ministry of education and science of the kyrgyz republic and business partners (TM Beeline), Coca-cola bishkek bottlers cjsc. BAKAY BANK JSC) in order to create a culture of innovative cooperation and quality between business and universities, in order to develop innovative education methods through the formation of flexible skills necessary for life (soft skills).
29 educational programs from the following universities took part in the competition: Kstu im razakova, Academy of tourism, bsu named after k. Karasaev, KSU IM ARABAEV, talgu, keu, kgi, kgusta named after n. Isanov, Osh State University. The participants of the competition were to change the approaches and methods of learning within one semester in order to form six flexible skills among students who are in demand in the labor market of the kyrgyz republic today. The list of flexible skills was formed by three business companies – partners of the contest. The contest consisted of 3 stages – at each stage the results of the work of teachers and students were evaluated, who had to demonstrate the application of soft skills both students and teachers. An important requirement for participants was to consolidate the modified learning methods at the level of the entire curriculum in order to continue changes in universities on the formation of flexible skills in students and after the completion of the contest.
Representatives of business company from sky mobile (TM Beeline), Cjsc Coca-Cola Bishkek Bottlers, bakay bank, ministry of education and science of the kyrgyz republic and quality assurance agency took part in the competition assessment of the competition. Education “ednet”.
The winner of the competition was the educational program ” International Relations ” of the academy of tourism, which received the whole prize fund from leading companies in Kyrgyzstan: ” Sky Mobile ” (TM Beeline), Coca-Cola Bishkek Bottlers, bakay bank “. special prize from ednet agency The program “gm curative case” of osh state university has received. In addition, the organizers of the seminar allocated individual teachers from all the universities who took part in the competition, who were able to show a professional and active position during the competition. Teachers of the Department of Clinical Discipline received certificates in English

"Reforms of medical education in the Kyrgyz Republic". 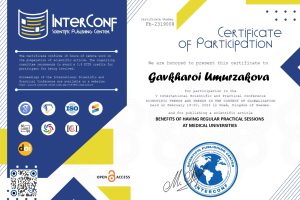