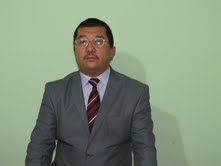 a senior lecturer at the Faculty of Medicine on the subject of “Pharmacology”.

7. In 1996, he successfully defended his thesis, awarded chenaya degree of candidate of medical sciences.

8. In 1998 and 2001 he worked as Deputy Dean on contract for foreign students at the Medical Faculty.

10. Since 2006, Associate Professor of “Biochemistry, Pathophysiology and formokolgii” Faculty of Medicine.

12. In 2009, the dean of the faculty “of Postgraduate Medical Education”

13. C 2014 Director of the Medical Clinic of Osh State University.

14. Since 2016 the International Dean of the Faculty of Medicine at Osh State University.

Dean of the International medical faculty of OshGU